The ladies of Blackpool Roller Derby League’s A-team had trained hard for the past 18 months in preparation for this significant event, against an extremely high calibre opposition, which included the reputable Victori Bee of Team England!

The journey to triumph would be bumpy and maybe a little bruise-y, and for some skaters this would be their first public bout, which can be quite an unnerving experience! First off, a hearty team breakfast was in order, for fuel and relaxation ahead of the exhilarating pressure whirlwind in front!

Post-breakfast, the Coasters changed, got their skates on and began warm ups, as the crowds began to flow through the doors, and nerves and excitement really set in!

Then, it was time, and the starting whistle blew; all wheels on track, fighting for the win. We saw jams and power jams, blocks, whips, waterfalls and some really quite painful falls – but both teams consistently got right back up again and battled their way into the hundreds of points. Bern In Hell kept careful score, and while it was close throughout both halves, the final result had seen BRC push harder to take the prize, with a confirmed closing score of: Blackpool Roller Coasters 187 – Vagine Regime UK 144.

This gutsy game was all over before either teams knew it; Blackpool Roller Coasters’ victory was a well-earned feat and both teams congratulated the other with a mix of hugs, hi-5s and pile-ons!

Awards were granted to the best performing players in each team and the camaraderie, which is never sparse in Roller Derby, continued throughout the afternoon at Copperface Jack’s pub!

“As the league’s training manager, I could not be more proud of our Roller Coasters for what they have achieved since the league started. To play our first public bout as the Roller Coasters was a huge achievement in itself but to have won the bout was an awesome feeling for the team! Our girls have trained so hard to build up their skills and gain experience and it really showed that hard work does pay off! I am very excited for what the future holds for the Roller Coasters and cannot wait to start taking on teams from all over the UK!”

The league would like to thank absolutely everyone who got involved in Bout ‘n’ Proud, from Bout Managers and committee members to guest coaches and skaters, as well as stall holders, those who donated raffle prizes, photographers and film makers, too – and that’s to name but a few!

The Blackpool Roller Coasters are incredibly proud of their first public bout and would love you to join them! Roller derby is an energetic team sport open to anyone aged 18+, male or female. You don’t need any skating experience either! Our excellent coaches will teach you from the beginning, ensuring that you’re safe and having great fun.

I’m part of the league myself, and while I’m still starting out, it’s one of the best hobbies I’ve ever been involved with! I feel fitter, positive, more confident, and I’ve made a great bunch of friends in the process, with whom I proudly kick butt, every Sunday afternoon at training! It’s great.

Fancy checking out a bout and having a great day out? There’s one coming up locally, on Saturday, in Preston. It’s just £4-50 for the event and there’ll be cake and merchandise stalls. It’s open to all ages and you can buy your ticket here. 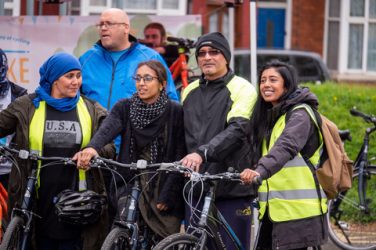 On Saturday 6 May 2017 fans from all over came together to support and ...