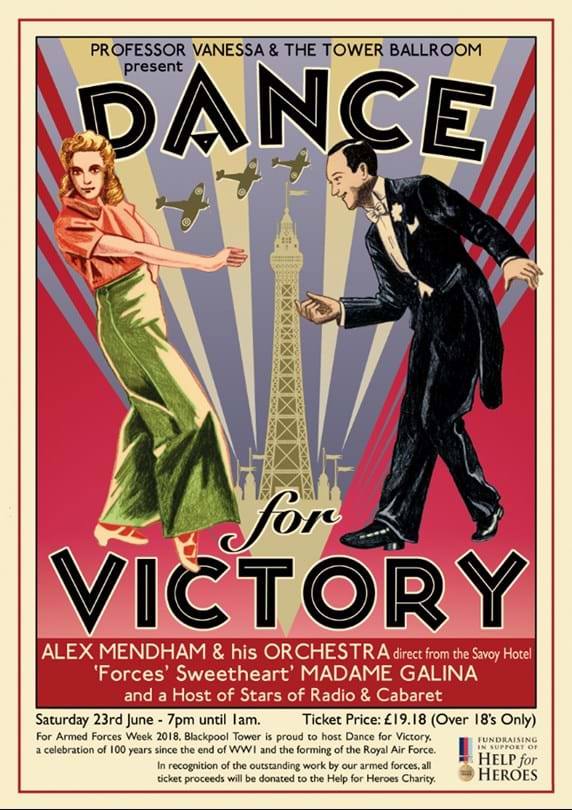 Get ready to jitterbug, jive, swing and lindy hop the night away when The Blackpool Tower Ballroom becomes centre stage and flings open it’s doors for a spectacular Dance for Victory.

Professor Vanessa and The Blackpool Tower Ballroom are set to present the unmissable fundraiser as part of Blackpool’s Armed Forces Week 2018.

Proceeds from the Saturday, June 23 event will go to the Help for Heroes charity which provides lifelong support for service personnel and military veterans with injuries, illnesses or wounds sustained while serving in the British Armed Forces. What a brilliant idea, AltBlackpool thought.

Fabulous ‘forces sweetheart’ Madame Galina, who has entertained the troops in Iraq and Afghanistan, will compère the event which features Alex Mendham and his Orchestra, coming to the famous Blackpool Tower Ballroom direct from London’s Savoy Hotel.

The evening will also include stars of radio and cabaret including Britain’s number one classic burlesque act, Miss Betsy Rose, comedy cabaret favourites Jones and Barnard, a circus troupe, and The Pleasure Beach Dancers.

Meanwhile, former British National Latin American finalist, and Strictly Come Dancing choreographer, James Wilson and his partner Elinor Summers will step back in time to the 1940s to perform the jitterbug and a jive danced in military uniform.

Professor Vanessa, who previously organised the popular Carnival Ball at The Blackpool Tower Ballroom and is giving her time free of charge to produce this latest event, said: “People can expect an evening of glamour, excitement, romance and fun.

“It’s amazing to be back at The Blackpool Tower Ballroom – this is part of the thrill for me. It’s the best atmosphere in the world.

“I wanted to do this because my nephew served in the forces in Afghanistan and Iraq, and when he came out it was Help for Heroes, along with the Royal British Legion, that helped him.”

Gaynor Jordan-Davis, Head of Regional Fundraising at Help for Heroes, said: “Help for Heroes is delighted to be involved with Merlin Entertainments in what promises to be a memorable evening.

“Dance for Victory will bring together people from all backgrounds and will kick start an exciting eight-days across the country. Each day, seven Service Personnel are discharged from the military, and the dance is a fine way of honouring our heroes as part of Armed Forces Week.”

This year it kicks off on June 23 with this amazing fundraising evening at The Tower Ballroom, and is followed by a series of events and entertainments from June 25 to July 1, culminating in a parade and special service at Blackpool Cenotaph.

I caught up with Professor Vanessa the women behind June’s Tower Ball to find out more about what is in store for Blackpool’s Summer Ball.

q:  Tell us a bit more about the Tower Ballroom Ball in June.

a:  We are presenting an amazing extravaganza of great music fantastic  new variety and wonderful dancing to help raise money for Help the Heroes in association with Blackpool Tower.  I’m really touched and excited to come back to the ballroom to do an event after doing 7 years of Carnival Ball there.  We are really hoping that all the  many loyal fans of Carnival Ball who were sad when it ended and I left Blackpool will come to this as its in the same spirit but also raising money for a great cause.
q. What makes Blackpool such a special place for this kind of thing?
a. There’s nowhere in the world like Blackpool that mixture of charm cheekiness sophistication and absolute stunning venues with the local population who just love to have a great time.

q. Is there a dress code?

a. Sexy vintage old style glamour both boys and girls can bring out their best fab dresses.

q. What are you looking forward to the most with regard to the Ball?

a. Seeing Alex Mendham from the Savoy London bring his amazing beautiful big band they were the best and most favourite band I had in carnival ball so I just wanted to bring them back but most of all just seeing Blackpool people of all types and ages putting on their glad rags my mother who is 83 has brought a new dress and is waiting to dance the night away the night is open to cross generations so whole families can attend together.

Dance For Victory takes place on June 23. To reserve your FREE tickets, please email your name and address and amount of tickets you require (max. 6) to [email protected]

For more information on the full programme of events for Armed Forces Week, please go to www.visitblackpool.com/armedforces 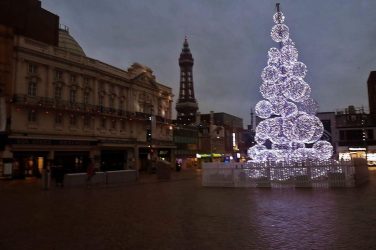 As the Christmas fast approaches the Blackpool arts scene brings an abundance of cultural ... 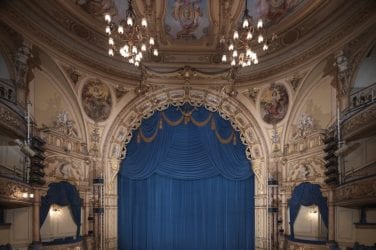 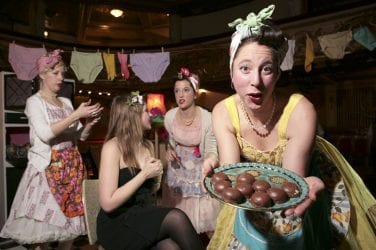 Showzam! Gets Creative for the Kids for 2013.

If you have not heard of Showzam! you are missing out on something spectacular. ...