As we move towards the big weekend of live street art, with the 3rd iteration of Blackpool’s Sand, Sea & Spray Urban Art Festival, proof that the event is getting bigger and it’s reach is getting longer, is the calibre of artists who are joining us for the first time, both from the UK and farther afield.

First up is Shai Dahan. Shai was born in Haifa, Israel and moved to the United States in 1989. He began his art career in Los Angeles and was introduced to the graffiti culture and started to create graffiti influenced art when he was 14. In his early 20′s, he continued painting urban influenced art on skateboards and surfboards for projects and charities. After moving to Manhattan in 2007, he took part in the New York Street Advertising Takeover, when over 120 illegal billboards throughout the city were white washed by dozens of volunteers, then over eighty artists transformed these spaces into personal pieces of art. Since then, he has also taken part in the Toronto Street Advertising Takeover, and the Madrid Street Advertising Takeover.

In 2010 Shai was part of the Underbelly Project in New York City. He was one of 103 other street-artists invited as a select group to paint an abandoned subway station. The project was published as a book titled “We Own The Night”.

In May 2012 he travelled to Bethlehem in Palestine. The trip was documented for a documentary film titled “Art On The Seam” where Shai painted a large mural of an Arab Bedouin on the West Bank Barrier wall.

Shai has already completed one piece on Deansgate (The Old Rock Factory) and is currently ploughing through his second piece on Cookson St Car Park.

Joining us from London are Id-Iom, a pair of twisted brothers, gonzo designers more than willing to take punt at pretty much any design challenge. Hugo’s hands and feet, however, are proportionately too big for his body whilst Sholto’s head is shaped like a peanut.

They are determined never again to suffer under the yoke of an oppressive employer, and have chosen the fickle world of art and design to implement a full spectrum dominance of the global economy. An example of the subversive nature of their work is the ‘Back to the Future’ mix tape project, which sees Id-Iom combine two of their loves – music and street art. Both members of id-Iom have been DJ-ing for years and, rather than go the inevitable route of uploading their mixes to Soundcloud and have no-one listen to it, they’ve attempted to fuse their street art activities and proclivity for making mix tapes. They secure a copy of their mix CD to a standard roofing slate, creating art to compliment the tunes, and sign it on the reverse with their trademark Id-Iom stencil and logo. From there it’s just a matter of putting it on the street and seeing what happens. Free Art Friday with a musical twist…

From about as far away as you can get Jon Drypnz comes to us from New Zealand. With a birthplace in the south of England, Drypnz has never had a constant place of residency and this seems to be evident in his work and the evolving fictional world he has created. He is interested in the repetitiveness of humanity and the significance it has on how we see ourselves in our respective societies. His work contains huge, oddly shaped, fantastical figures. At times whimsical and poetic, these figures are often seen in surreal settings, sometimes in fantastical domestic visions, sometimes running, often on bicycles.

He is now a local in New Zealand’s capital city, Wellington, and he has been developing the Drypnz world since 2006, culminating with shows in New Zealand, Australia and London.

Karima Francis and The Clever at Blitz, Preston 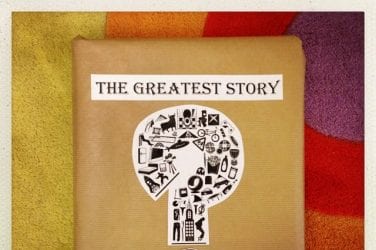 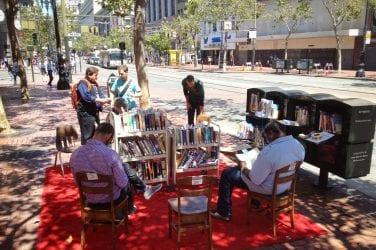 Are you a promising designer or artist? Then Blackpool Library Service would love to ... 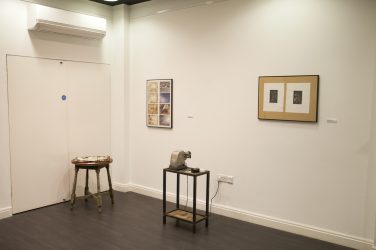