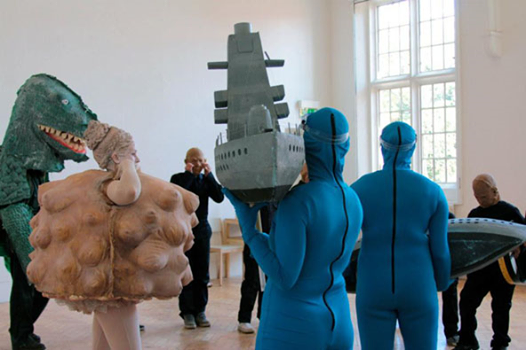 As the Grundy says, “In Aping the Beast, London-based British artist Serena Korda uses the staging of animal symbolism and folklore to explore questions of mimicry, spectacle, ritual and humour. The central work in the exhibition is a giant 15ft tall latex puppet dinosaur, created by Korda, recalling early B-movie horror films such as Godzilla or The Beast from 20,000 Fathoms.”

It does this with some success and a beguiling amateurism of appearance, typical of many of the monsters in films of this sort. While the sculpture remains static for the most part it is designed to move with the help of a team of volunteers, some of them working on Wednesday at the Grundy, at Fertility Orbit of the Boob Meteorite.

Quoting the Grundy once more, “the monster is seduced in a romantic duet with a female performer (Sarah Jane Lockwood from Lancaster) costumed in fake fossilised breasts – an orb of female energy.” This short event was accompanied by a duo of musicians known as Grumbling Fur, who got a lot out of electronics and strings, even managing live percussive effects.

The interpretive dance performance illustrated, for the artist, the idea of a sexual awakening. I felt this idea could have been developed a little more if the piece had been somewhat longer. There seemed to me to be sections which were using quite obvious metaphors while others were little explored, such as the image of the meteorite/woman and what sort of sexuality is implied in the costume and the relationship with a dinosaur. To me it raised the issue of the theory of dinosaurs being wiped out by an asteroid strike and how this might raise images of a love/hate relationship. I’m not sure this was any intention of the work, but it is good that such thoughts might be explored through the bringing of innovative art to the Grundy.

On 19 July, beginning at the Grundy at 2pm, the beast will take to the Prom, ending at the Tower Circus (check with the Grundy nearer the time if you’d like to go along to ensure details remain the same.) The themes of animals and carnival should again surface here. On the day of the procession there will also be the involvement of Blackpool’s Male Voice Choir.

This Blackpool event is echoed in a display of a piece of ephemera from the 1920’s featuring a Blackpool carnival and its odd array of fake creatures. Why not go and take a look? Don’t disturb the beast. 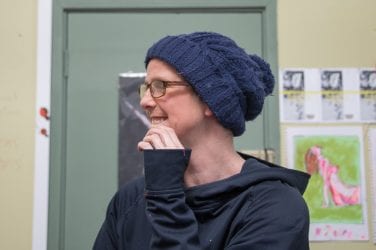 With a range of diverse and dynamic artists living and working on the Fylde ... 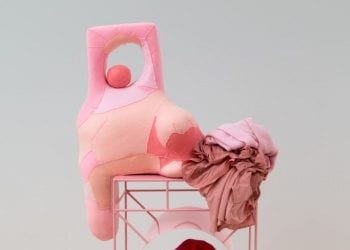 Enjoy Summer Punch At The Grundy

Following Act I at PEER in London in 2016, Jonathan Baldock and Emma Hart ... 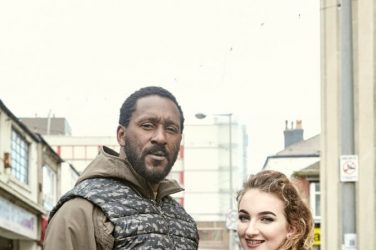