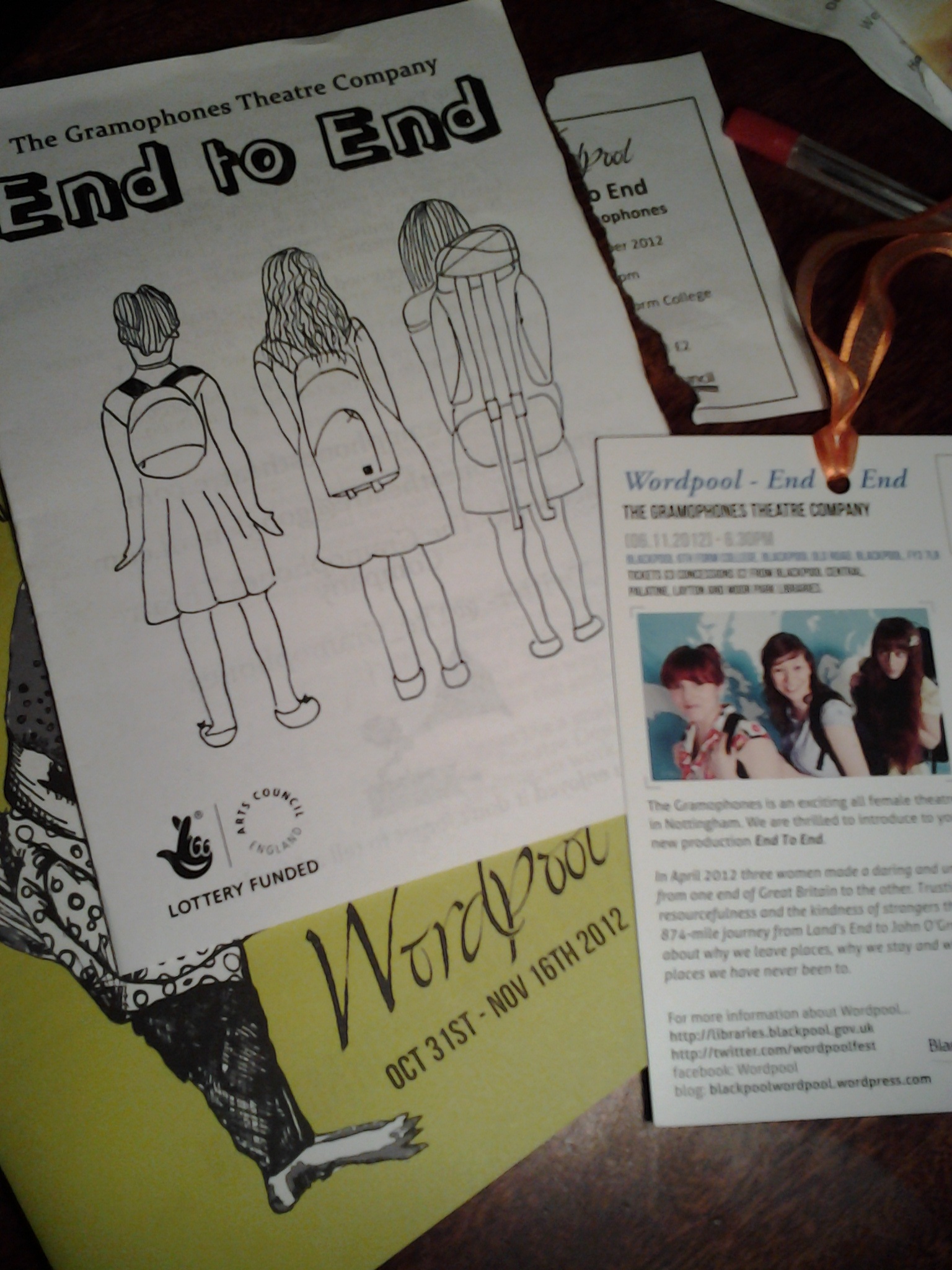 Walking into the small Starbucks cafe at Blackpool Sixth Form College, (who knew?) I was delighted to see a giggling bubble of teens brightening the space and chirping happily in expectation of a Wordpool event.  Approximately 30 students had turned up to see The Gramophones perform their theatrical storytelling piece, End to End.  I was pleased that they had turned up as this was my second time seeing this show and I knew it wouldn’t disappoint.

Ria Ashcroft, Kristy Guest, Hannah Stone (performers) and Tilly Branson (director) greeted the audience on the floor as we entered the theatre space (another hidden gem), asking us to fill in cards with our idea of ‘home’.  This is just one of the methods which the company employs to bring the performance out into the audience and it lent a feeling of sincerity to the audience/performer relationship.

End to End is the story of Ria, Kristy and Hannah’s 18 day journey from Land’s End to John O’Groats.  The women decided to make the 874 mile journey using as many forms of transport as possible, using a minimal amount of cash and relying largely on the kindness of strangers.  This was an effort, they stated at the start, to respond to the expectation that as women in their 20s and 30s they ought to be settling down and starting families.  Instead, they wanted to go on an adventure and show the advantage of being ‘without ties’ and free to set off across the country on a whim.  During a discussion session following the performance, one audience member commented that she would like to see them make the journey again in 15 years with the addition of children to see what difference it would make to the experience.  I found myself agreeing with the idea of rebelling against the supposed necessity of having children while at the same time knowing that adventures with children can be every bit as much fun, life-affirming, and potentially life-threatening.

There is a strong visual and kinaesthetic aspect to End to End.  The set is dynamic.  Almost every prop was used at some point: maps with pins, a stool which becomes both a bike and a screen for the hand-held projector, clothes racks with coat hangers for costume changes and a signpost which is used to record the heights of the audience as they come in.  Ria’s background in circus performance and Tilly’s fringe experience were evident in the physical aspects of the show.  The women re-enacted space-hopper races, piggy-backing, and cycling (uphill and down) with these segments providing many laughs.

The soundtrack was sensitive; gentle guitar picking and a soft male voice picking out the more emotional aspects of the journey.  And the performers gave a refreshingly candid account of the emotional ups and downs of their trip which felt very real as they were recounted.  The bond between them was evident in their frequent smiles and glances at each other while remembering characters they had met.  These characters were described with affection, and sometimes we would hear them speak or see a photograph, but they were never caricatured.  This was a conscious effort, they explained during post-show discussion.  They decided that if they couldn’t portray a person to their face, i.e. during a show, then they shouldn’t do it at all.

On the question of inspiring other women to take off on adventures, the group responded that yes, they do feel that women are under-represented in the arts and would like to see more women setting off on their own journeys.  They added, however, that they are aiming to inspire all the audience to take that step.  Postcards and seeds were handed out at the end and there was the opportunity to read the postcards from individuals, some they met on the trip, who have written to the group with tales of their own adventures.

Perhaps I have been charmed by the openness, the effortless affability of The Gramophones, but I really can’t find fault with any aspect of End to End.  It doesn’t set out to change the world, only to sow the seeds of adventure into its audience’s hearts.  To my mind it achieves exactly that along with an ample sprinkling of genuine empathy and a bright gleam of humour.  The students at Blackpool Sixth Form seemed to agree, a girl behind me describing it as fate and that she felt it was time to head off on a journey of her own.

End to End will be touring Spring 2013.  Their Edinburgh Fringe hit, Anything to Declare, tours in March.  Keep an eye on Twitter for updates. 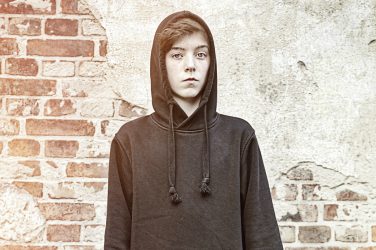 Justin Audibert is a brilliant young director whose career has taken him from Sheffield ... 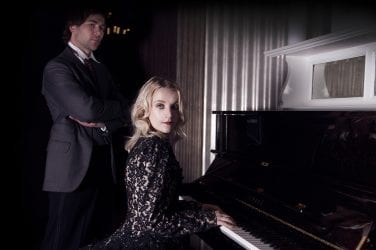