The Grundy have really pushed the boat out with their current show, or to be correct, pushed it in. A speedboat, a car and a huge film-filled environment are part of the eye-blasting wonders.  Heather Phillipson brings her highly acclaimed immersive art experience, Yes, surprising is existence in the post-vegetal cosmorama, to the Blackpool gallery after its successful run at Gateshead’s Baltic space.

It is an ambitious show on every level. From the sheer scale of the works to the content of the three films on offer within their enclosing, focusing environments.  It is a bold, big and brave show as well, all the ‘B’s’ are represented.

Entering the gallery that we all know so well is slightly disconcerting.  Gone is the traditional doorway into the space. Instead we are invited (after a quick word about it getting dark inside) to enter through a large garishly coloured organic form. It becomes apparent what this entrance is after you exit through the other side of the winding tunnel like structure. The whole of the Grundy’s first two galleries are completely restructured into a long twisting tunnel that leads you a womb area. This area has pillows and cushions and you are invited to sit, slump or lounge as the first of the three films plays.

As you are about to be rebirthed, the first film tells you some of things you will encounter in your new life. Pot plants, dentists and funky shops are among the sights you might see.  So onwards after the film to the action of rebirth.  You exit the tunnel area back into the gallery space.  As you walk down the Wizard of Oz-like blue ramp way you realise you have in fact been birthed from a gigantic erm, well a search for a term that won’t come across as smut-fuelled escapes me so I’ll tell it straight, a gigantic vagina.  Oh, but what a vagina! Like an anatomy lesson on psychedelic substances, the vagina at the heart of monumental banana legs looms above you in bright primary colours bedecked in plastic flowers. It is an arresting sight.

I should add that the show is family friendly despite the above description maybe painting it as less than. The excellent Grundy volunteers are trained to sensitively pitch the show to any level or age group. So don’t let the visuals put you off if you’re bringing the family.

Follow the blue path like a stream into the far gallery, past a sculpture construct of garden tools and plastic bananas, to the speedboat. Climb inside this full-sized six seater cruiser, held aloft on thousands of bottle of water, for the next film. Yes, it really is as visually bold as that, it’s a sight that you don’t often get in a gallery outside of a convoluted maritime accident.

The film in the boat is a journey through the mouth and the things you put in it and the things that come out of it. Tongue twisters will test you as you try them without realising it. Be careful as you leave as it can be an odd experience getting out of a boat indoors.

Ensure you do not miss my favourite part of the show.  As you leave the speedboat gallery, take a left down past the rear of the banana leg into the far gallery.

Sitting on a pool of red is a violently yellow car. A sight in itself, but when you sit in the car you are treated to a brilliant ten minute film about French kissing/French cuisine. I won’t put any spoilers in here as you should watch the film yourself. It will make you smile with a knowing wink I promise you.  Do make sure you put enough time aside to watch all the films in their entirety as they work so well within each of their immersive environs.

The films are fantastic, each dealing with a form of journey. Indeed the whole show has the journey at its heart. As you leave via the back of the Grundy and find yourself at the rear of the library, on a street you probably never walk down, you can’t help but think that you have been taken on a journey both conceptually and physically.

The show runs until 6 September. 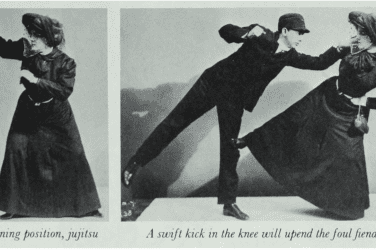 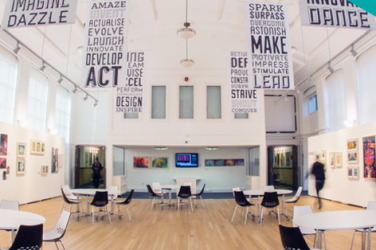 It’s the time of year when students, having slaved for months, can finally stand ... 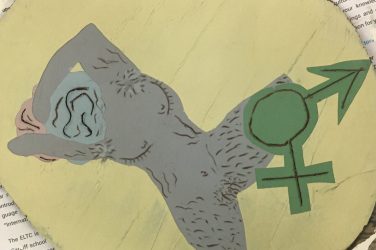