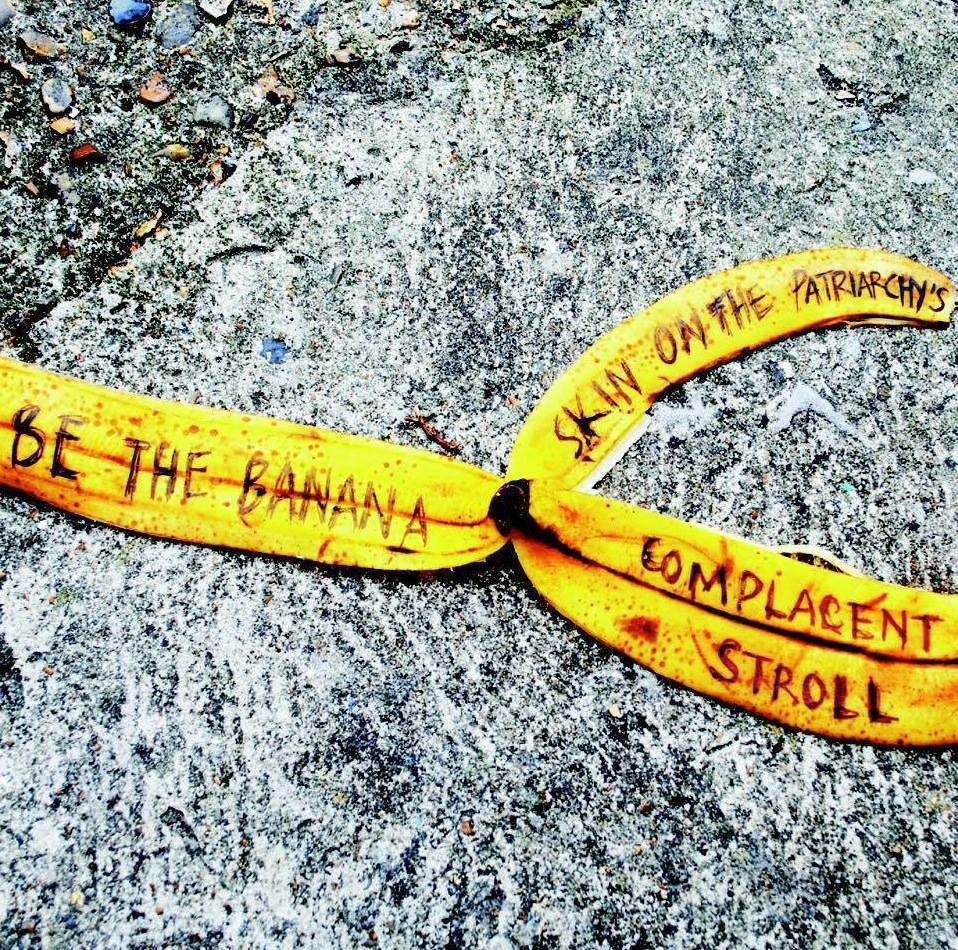 Blott Art Studios in Blackpool, UK, established for since 2000 and based in the heart of Blackpool and run by the passionate and proactive Corrine Streetly.

Their latest exhibition entitled Be The Banana Skin (On The Patriarchy’s Complacent Stroll) is a ‘Feminist Art’ intervention based in Blackpool, North West, UK, opened to coincide with International Women’s Day on March 8th and running until 31st March.

I try not think about being a woman or feminism a great deal, I think I try to ignore being a female where I can, ignoring the limitations and labels society sometimes places on me, however, I do wonder why ‘Page 3’ still exists and believe that objectifying anything is really a mistake, including and most definitely the objectification of females. This exhibition slaps you in the face and states “Don’t Call Me Love”, I can bench press or ride a skateboard or make money (if that’s a measure of life), or beat you on a computer game, or use a DSLR, and I am sure as hell going to beat the shit out of you when I create some artwork.

I was immediately struck by a large figurative piece depicting a strong female form, back turned against a child clinging onto the plait falling down her back, painted in umber hues. The painting’s sense of fragility amplified as the form embraces itself; the work is entitled ‘Rejection’ and is by Sylvia Mason. This particular piece exhibited posthumously.

Ann Carragher’s mixed media collages are clean, and remind me of Pop meets Surrealism. Organised and traditional feminine forms are dark figures placed in bell jars with shadowy backgrounds,  looking away. A sense of “in-between” and “other worldliness” creeps through. Popular filmmaker Tim Burton would approve.

The glass cabinet displays an array of surreal sculptures and appropriated items created by Boz Phillips: Vegitaliens, The Egg Collector, Watch with Mother, Twins, Baby Tomato head. Her bird figures featured in the window of Blott are seated majestically in their cages, ‘Birds’ being an age-old expression of women.

“The problem of woman,” André Breton wrote in 1929, “is the most marvellous and disturbing problem in the entire world.” A sort of back handed compliment?

Corrine Streetly’s sculpture of Mary Wallstonecraft, English writer, philosopher, and advocate of women’s rights, pays direct homage to her subject who recognised that being a woman was more than just nurture and nest. The bust displays Corrine’s natural artistic ability creating a post-renaissance feel. I love Corrine’s collages of statements of misapprehension of women? Only Child Apparel’s T-Shirts are also genius: “Heroine Addict” and “Men of Quality Do Not Fear Equality”.

Jill Reidy’s images of individuals she has met who share an affinity with both male and female characteristics are both endearing and humanistic. These sorts of images by Jill always remind me of Nan Goldin’s Photography and Goldin’s documentation of friends, family and people around her, telling stories and questioning perception.

As we head into the “restricted area” of the exhibition the ever powerful and confrontational paintings of Tina Warren smack you in the face; the skilled execution of paint accompanies strong accusatory depictions of the abused female and child. These images remind me of Jake and Dinos Chapmans and other YBA’s of The Sensation.

The images in the back room stand in juxtaposition of one another. Zoe Cox’s paintings have a sense of playfulness about them – A kinda’ poking fun at those really, blokey blokes. A play on images, a naked women stands before us, a vulnerable moment, yet challenging the viewer, offering a traditional male toy, a blue plane. The particular painting is called “Boys Toys”.

The exhibition features new works by regional and national artists, and international guest artist Sarah Maple, whose images raise questions about female perception; she looks like a super hero standing in her ‘Anti-Rape Cloak’ to protest victim blaming but there is also a level of vulnerability.

By bringing together some of Blackpool’s best established and emerging ‘Feminist-identified’ contemporary artists, Corrine’s aim is to encourage discussion by exploring issues around the representation of women, the art world and wider society; speaking about the exhibition she said: “We must make works about gender disparity in the art world and make work about issues specific to women; facilitating conversation.  Art is a great tool in visually communicating ideas and promoting discussion about subjects often considered awkward; some of the works are aesthetically stark and intensely personal, some encourage the viewer to consider the way we perceive, view and portray women’s bodies and identities in the media.  We hope viewers genuinely interact and are engaged.”

Artist Tina Warren added: “Feminism is a contentious issue, and is often misunderstood because the word itself creates division, but Feminism is essentially about equity and equality for all, from a feminine perspective.  This exhibition reflects the diverse nature of Feminism through a wonderful eclectic mix of work.”

Corrine added: “We are incredibly grateful to the wonderful volunteers at Blott, without whom exhibitions like this would not be possible!”

More information can be found on the exhibition Facebook page and it is open daily, Monday to Saturday, 10pm to 5pm, at Blott Studios, 53 King Street, Blackpool. Telephone 01523 620000. At the exhibition you are also invited to buy a raffle ticket to win some wonderful prizes and help raise money to support the exhibition and the studios (plus 25% of money raised will go to the women’s refuge). 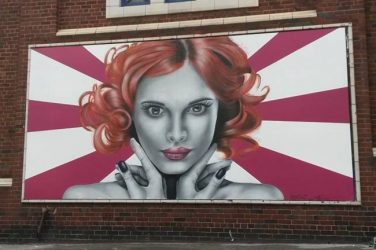 Blackpool’s annual celebration of urban art Sand, Sea & Spray is set to be ... 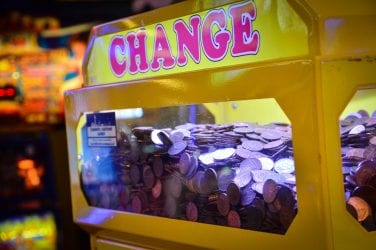 Leftcoast’s continuing creative legacy in Blackpool has thrown a number of opportunities across the ... 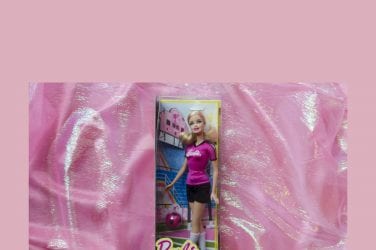 Photography exhibition Positions of Power is a pre-exhibition presented by Disparity Collective who are ...