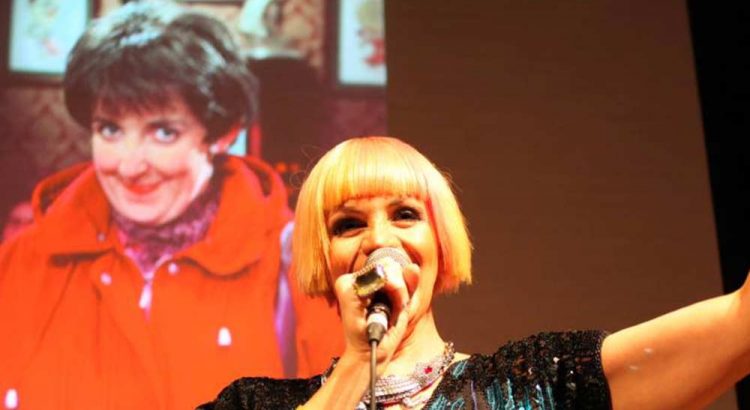 (Eds Note – this review was not published at the time it was written in error.  As it is a review, not a preview, the content remains valid so we have decided to run it late).

On Friday 9 June, kicking off Blackpool Pride celebrations with a beautifully sparkly platform sandal; talented, award-winning and completely loveable performance artist Kate O’Donnell brought her piece Hayley & Me to Blackpool’s Viva (a venue which is currently also under-going something of a transformation).

The cabaret-style performance centres around Coronation Street’s anorak-wearing, transgender character Hayley Cropper. Using narrative, song and video as well as audience participation (the ante on this was upped on Friday night as one audience member, who had come dressed as Ginger Spice, gave an impromptu dance whenever the interludes of Spice Girls music which pepper the show were played, to brilliant comic effect). Kate takes us through the somewhat fraught storylines that poor Hayley Patterson, born Harold, had to endure from when she first appeared on our screens in January 1998 until her final scenes in January 2014, not least the cruelty of the terrible hair cut and wardrobe choice combination.

For the 16-years that Hayley existed, she was played by the talented, if unpronounceable, Julie Hesmondhalgh with brilliance, sensitivity and, after a long-period of consultation with transgender campaign and information group Press for Change, general acceptance from the trans community. However, this piece essentially celebrates how far the trans community have come, as nowadays, the character of Hayley would more than likely be played by a trans actor.

Cue interval followed by Q&A with writer of BBC Two comedy Boy Meets Girl, Elliott Kerrigan. The 2015 sitcom tells the story of the developing relationship between 26-year-old Leo and 40-year-old Judy, played by Rebecca Root. Both Root and her character Judy are transgender, making BMG the first BBC comedy to feature transgender issues prominently, and the first ever sitcom to star a transgender actor; Kerrigan’s script was discovered through the Trans Comedy Award – a BBC Writersroom talent search in partnership with Trans Comedy.

This second part of the evening was hosted by local former-headteacher Carolyn Mercer, who at the age of 70, identifies herself as female and as left-handed; she draws this parallel as something she is born as, something that she also used to be beaten for and something that she is equally unable to change. Carolyn is part of The Stonewall Trans Advisory Group which supports the integration of trans equality and the brief insight we have into her journey (including a period of desperate desire to change when she went through barbaric shock treatments) gave a very real context to the issues facing trans people.

Kate, who has recently played the world’s first ever transgender Feste in Manchester Royal Exchange’s production of Twelfth Night, was able to give a mini shout out for own Arts Council funded organisation Trans Creative. Based in Manchester, she hi-lighted how most of the work she is currently offered is in Brighton and London, but she is more interested in developing the Northern trans arts scene.

The one night only performance of Hayley & Me was presented by Blackpool-based independent producers Carrie Rooney and Mykey J Young in association with QuAD; a group of five local creatives (including Garth Gratrix of ICW and Provocations) who are seeking to bring more Queer art to the town. So watch this space for further brilliant, queer and quirky programming in Blackpool! 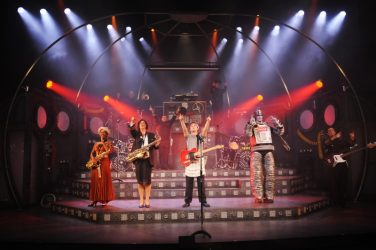 The 25th Anniversary Tour of Bob Carlton’s Return to the Forbidden Planet crash-landed at Blackpool’s ... 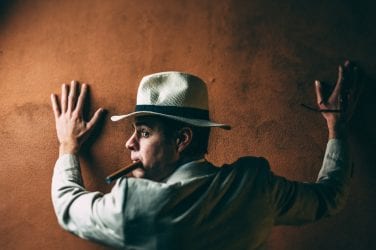 I Spy Classic Graham Greene At The Grand

Fresh from their successful staging of Travels With My Aunt at The Grand in ... 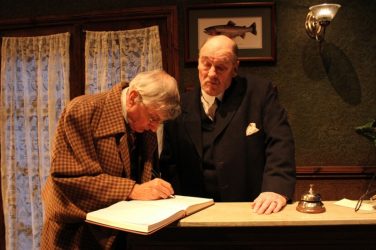 Classic Ghosts: Whistle and I’ll come for you my lad

When it comes to ghost stories, one name dominates, and for good reason. M.R ...