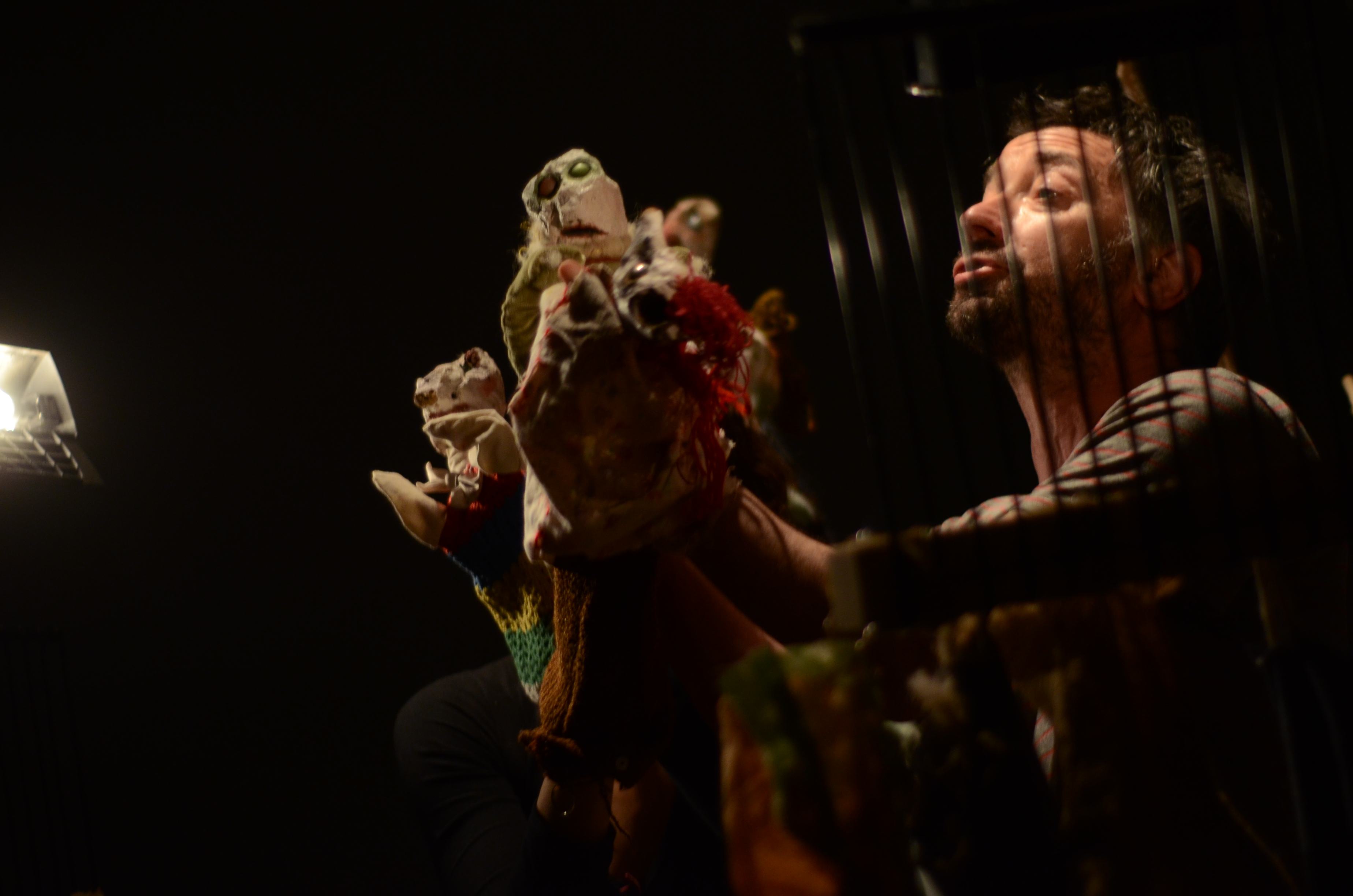 There is something oddly disturbing about puppets; even Sooty has an air of menace and for me Button Moon is the stuff of nightmares. So to attend a show at The Grundy that is just puppets is a prospect that filled me with a little trepidation.

Puppet Show, which opened on Saturday at The Grundy, is disturbing on at least one level. There are twisted looking creations at every turn.  But the fact that these bestringed characters serve more than one purpose and are tools of storytelling and deeper messages allayed my fears and I managed to get past my childhood traumas and relax into enjoying the many and varied sights on offer.

Entering into the gallery you are confronted with a towering chair that has two quite frightening puppets hanging from the arms, an installation that without a puppeteer speaks of potential. What tales could these wizened witch-like puppets tell? Looking up, small ramps and ladders hang from the balcony of the upstairs gallery like the threat of hurtling small bodies, but this sly humour raises a smile rather than protective arms. The first gallery in The Grundy is a menagerie of giraffes and roller-skate/pencil hedgehogs. Films play on monitors adding sound to the audio experience which can be a tad overpowering as the sounds of the many films that are part of the show mingle into a dark carnivalesque experience.

It is with the films that the puppets really come to the fore. Two of the galleries are given over to large-scale projections of exquisite films. One has an architect dreaming of past or perhaps future glories whilst a parade of characters drift through his musings in a surreal role call. This film is incredible and when you visit do leave around half an hour free to watch it in its entirety. The same can be said about the other large screen showing, in the next gallery, a quite bleak but beautiful look at unemployment and the need to retain dignity.  It is a harder work to experience but one you will be richer for seeing.

The collection of twisted figures mounted on sticks and branches is another arresting sight.  Lit in a twilight gloom, the intent to really showcase the darker nature of puppets is clear and effective. The main gallery contains a mix of photos, wooden marionette forms, and a specially created enclosed screening space which shows a slightly more risqué puppet film that might not be quite so suitable for the kiddies. Speaking of kiddies, there were a lot of them in attendance on the opening day, and far from loading the often scary looking puppets with our jaded adult sensibilities they loved it!

There is so much on show, that what could be a staid day wandering round a gallery becomes a riotous adventure for them. Upstairs in the balcony gallery, a single environment has been created.  Rough papier mâché rocks create a weird seaside scene. Ragged found object puppets are dotted around doing the things that puppets do; lurking in a pool of water, selling green burgers from a stall etc. No really, they are! It’s well worth the trip up the stairs to enter their world.

Opening day also held a couple of live performances, but those expecting Punch and Judy or Thunderbirds were in for a shock. Kitten Triage by Edwina Ashton had huge wonky headed kittens taking over the office and gallery.  They were ministering first aid to anyone brave enough to be wrapped from head to toe in bandages by a six foot mutant kitten.  You did get a certificate if you did.  Mine is now a proud badge of my bravery. The second performance was Pleasure Island and Empire of Dirt by Heather and Ivan Morison with Owen Davis. This was truly a voyage into darker and uncharted territory. Twisted and horrific characters told a puppetry tale of dangerous love, dying babies and death coming to call. It was as scary as it sounds but wonderful, magical and the music by Owen Davis was mesmeric.  If you ever get the chance to see this performance take the plunge, you will be well rewarded.

For me it was a great show with so much to see and experience within the walls of The Grundy. I can see how the content might be a little strong for the faint hearted and the very young, but this is a small gripe and shouldn’t really put anyone off going. Oh, and The Grundy have now invested in a coffee machine.  This is a big leap forward and makes future openings even more attractive.

Puppet Show runs until 31 May 2014.  To see the range of related activities, from guided tours to puppet performances and workshops, see The Grundy’s website.

Crazy For You at The Grand Theatre Preview. 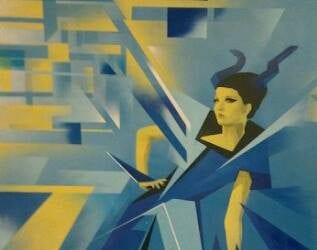 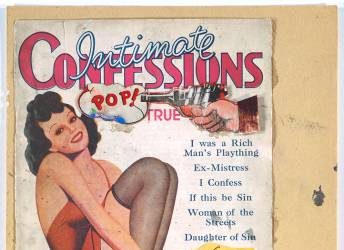 Rock and Pop at The Grundy

Pre-Pop to Post-Human: Collage in the Digital Age is an exhibition of 37 freshly commissioned ... 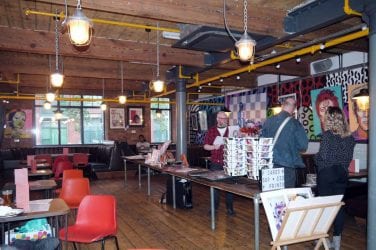 On 4 May the ‘Best Of Blackpool’ exhibition opened at the Kosmonaut in Manchester, ...

Dawn Mander
0 comments 5 Shares
We use cookies to ensure that we give you the best experience on our website. If you continue to use this site we will assume that you are happy with it.OkNoPrivacy policy