Sadly, I was away when this event, preceding the exhibition, took place in Blackpool.  However, I did manage to catch the excellent, and very moving, exhibition the following week.

I was also lucky enough to get the view of Anne Cameron, who took part in the march.

Anne told me, “I arrived just as the event was starting and was pleased to see a sizeable crowd assembled on the car park at the rear of Blott Studios.  The choir from Manchester looked evocative dressed in Edwardian period fashions , were about to perform from  the balcony of the flat over Blott overlooking the car park.

The Revoe-lution choir also looked imposing dressed formally in black were ready to lead the singing from below.

I had been given a handout with what was to happen at the events and the words to three suffrage anthems and was getting quite excited. There was already a feeling of inclusion and belonging.

The event began and the choirs began to sing .The artist and singer Zoe Cox gave an exceptionally fine solo performance. That girl has a voice.

We joined in with singing the choruses

Singing ‘Rise up Women’ made me feel quite emotional and by now I was really getting into the mood of things thinking about what it might have been like to be involved in the suffrage movement.

By the end of the last song March of the Women I was feeling quite militant.

Then the choir came down to join everyone on the car park and the procession assembled.

The banner made by Seaside Stitchers, together with Aunty Social, was brought out. It was stunning and I wished I’d made time to be involved in the workshops because the end result must have been very satisfying.

Zoe was very much our leader as she marched at the front of the procession and she and the choir enthusiastically sang the anthems and everyone joined in.

I noticed more people in Edwardian costume and thought what a fine event this was. It was an empowering experience to take part in though we hadn’t had any scuffles with the police.

We reached St John’s Square and then retraced our steps back to Blott Studios where we could view the exhibition.

The artworks were displayed alongside the interesting display of suffragette postcards and I personally thought the exhibits were extremely well curated.

I was impressed by everything I saw especially the bust of Emmeline Pankhurst by Corrine Streetly and The Snow White Graduates by Sarah Maple, I thought were a powerful statement on modern feminism.

The back room of the gallery, I feel , is always an ideal  space for pieces to be exhibited to maximum impact.

The installation, ‘Fermenting Feminism,’ by Tina Warren, of the force feeding equipment and the jars containing liquids in the three suffragette colours was quite shocking though very effective and I really felt fearful  at the thought of the sheer terror and pain the women must have experienced in prison.

Pausing to look around the room I saw an excellent  painting, ‘Black Friday,’ also by Tina, that really portrayed to me what being at  a demonstration would have been like.

The event was very sociable and after chatting with friends I prepared  to leave the Gallery.

I had admired the maquette of Emmeline Pankhurst by Hazel Reeves in Manchester Art Gallery previously and what a marvellous privilege to see it as the  centrepiece for this excellent exhibition in my local gallery.

I had looked forward to this preview and may say I really enjoyed the evening. The communal experience of singing with the choirs and the enjoyment of the artworks made my night.

The attention to detail in the whole event was obvious and may I just say  how much I liked Corrine’s white suffrage dress and Tina’s prison wardress uniform.

Blackpool really has a hidden gem in Blott Studios.”

Fun in the Park with Wordpool Family Day 2018 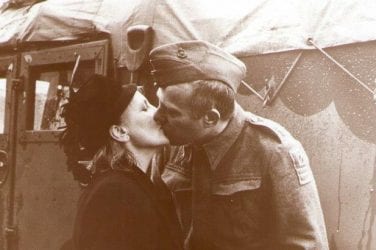 There’s a lot of creative activity going on in Blackpool town centre cafes these ... 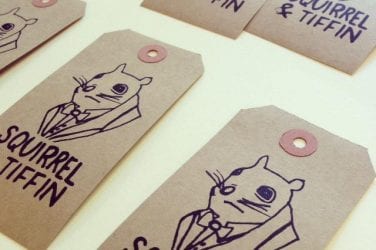 A new creative business has been gestating in the art and craft hub that ... 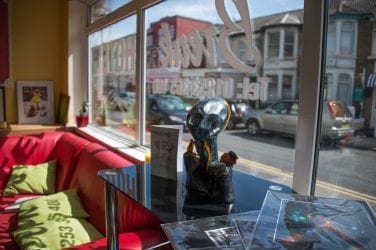