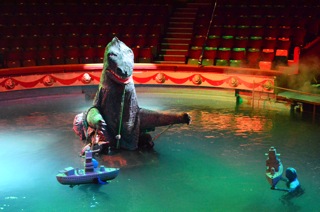 Friday 19 July, 2013 saw a procession of oddities traverse its way from the Grundy Art Gallery, through our town, toward our promenade, across the Comedy Carpet and finally swimming it’s way around our circus.

Hand in hand with 6 year old intrepid reporter’s assistant Patrick, we relentlessly pursued – and at one point overtook for a better vantage point – a parade consisting of two warships carried by two brave individuals in wetsuits, a breastacular performer resplendent in her return as the ‘Boob Meteorite’ and a further wetsuit clad gentleman carrying a smaller version of the ancient reptile we would come face to face with once inside the Blackpool Tower Circus.  The parade then culminated in a collection of little horrors from St John’s C of E school. The children were fabulous in there eager representations of Serena’s Boggarts and taking great delight in growling at me every time I attempted to film them.

The display within the circus gave an eerie and unsettling appearance to an arena with which I am utterly familiar and contributed to the effects of the bizarrely noted soundtrack sung expertly by the Blackpool Male Voice Choir.  It was exciting to see the involvement of local children in such a large scale artistic performance and the sci-fi geek in me absolutely adored the almost Japanese low budget drama in the performance within the Tower.

I did have to question the display’s accessibility however after sitting behind a large proportion of the audience who spent most of it discussing the technicalities of the floating stage and drowning out the glorious voices of the Choir without paying much attention to the performance.  In this case, a greater degree of audience direction and control by organisers may have assisted, however there is often nothing to be done about the wagging tongues of Blackpool’s applicants to the ‘Golden Girls.’

Eventually, I was able to focus solely on the piece and enjoy the demise of Beastzilla as the Boggarts deployed high jet water pistols.  It was at this point any grown-up had to admire the tenacity of the Beast’s operators who kept going unflinchingly despite being the central target for 30 school children armed with water guns.

I enjoyed the collection as a whole, although felt that some of my enjoyment came from similarities with past works around similar folk lore as well as the eagerness of the children involved and not from the originality of the artist.  Many of the themes appeared undeveloped and the battle itself somewhat incomplete.

From the view of my young assistant Patrick came the opinion “It was cool, the dinosaur was pretty scary, but it would have been more fun if they let us shoot the water guns too.”  Maybe something for Serena Korda to consider if she aims to involve children in future works.

All in all, it was a fun way to spend a sunny Friday afternoon without necessarily blowing your artistic socks off.

Blackpool: Is it really a crap town? 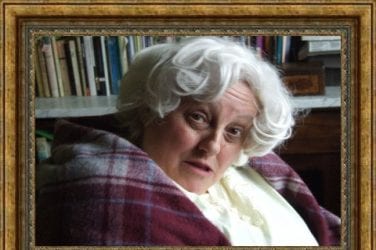 From her role as the earthy cleaner, Mavis Cathcart, in Emmerdale to walking the ... 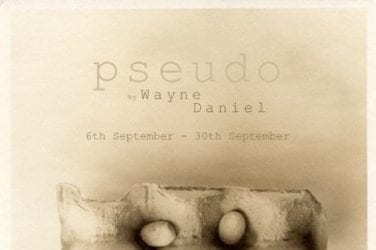